When you open an event in the Dashboard, OverOps displays the decompiled application MSIL and projects the runtime variable data onto it. For .NET running on the CLR, in order to display annotations, OverOps requires that you attach the original source code to the OverOps Agent. This procedure can also be applied when using a code weaver that expands your MSIL with large amounts of synthetic code.

Attaching your source code to OverOps involves a minor customization of the build steps - per environment. For the complete steps, see below.

There are a number of ways to display the source code in OverOps including:

Obfuscated Code may not be Supported

OverOps may not support obfuscated code that can’t be decompiled (or when decompiled generates garbage). In these cases, you'll need to attach the source code.

Native source code that co-resides on the machine on which the OverOps Collector is running can be attached to OverOps through the environment variable setting or property settings in the agent.properties file.

To attach the source code to the machine running the OverOps Collector: 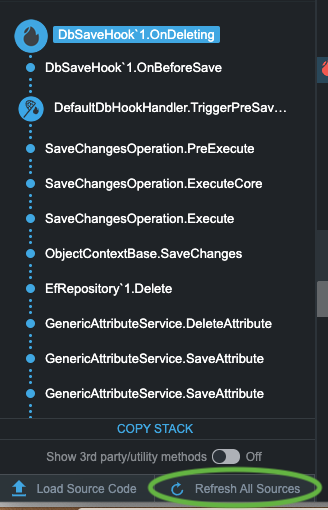 Sources should be deployed with a version under a specific folder: